Social media’s impact on the world 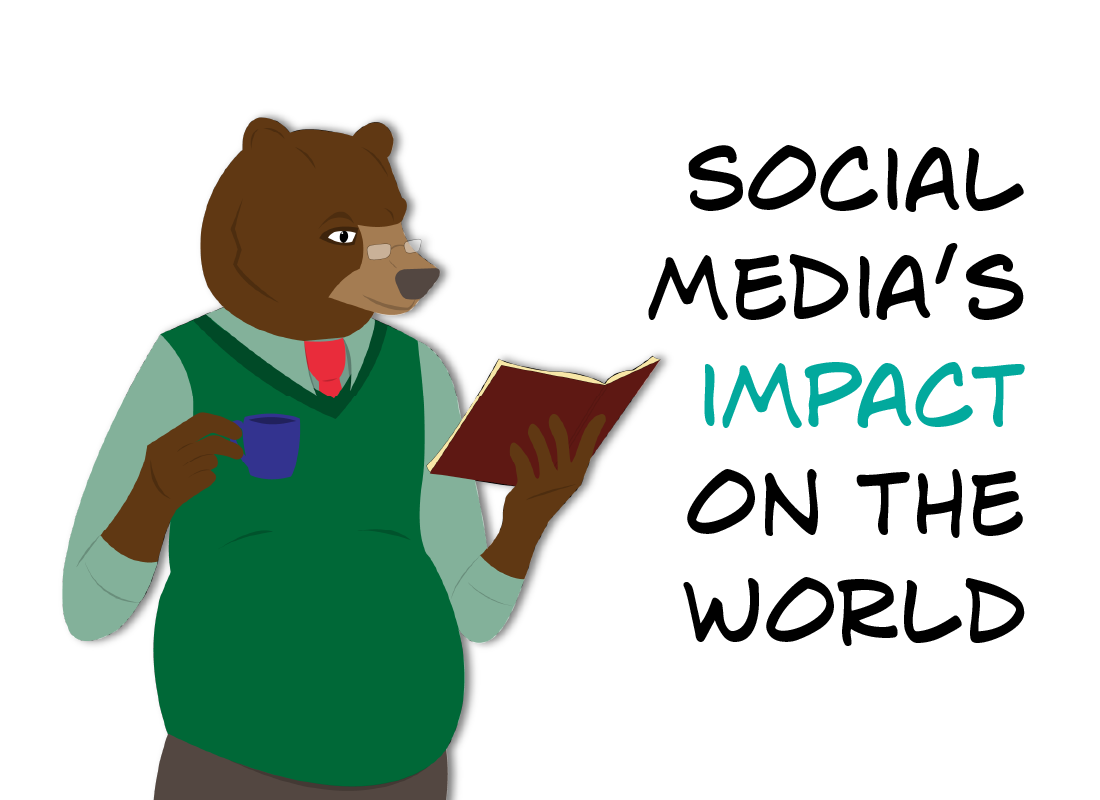 It’s incredibly difficult to imagine our world today without social media. No Facebook, no Twitter, no Reddit, no Snapchat, no Insta. Oh, whatever would the influencers do with their days without their Instagram following? Perhaps read a book? I jest, but yes, it is hard to think about life without social media. Take the news industry, for instance. News flies around the world in seconds, much faster than we would have ever fathomed 50 years ago.  Really, it’s an incredible influence that technology has had on us.

In 2004, Mark Zuckerberg thought that maybe he was onto something that could change the way that we communicate between our peers, but it was hard to see how Facebook, a small social media networking website, would completely revolutionise the way we communicate on the whole, not just a new way of keeping in touch with friends and family. Today, we look back at how much everything has changed, and wonder how we ever really coped back then.

While social media has a role to play in our communication evolution, it did not work in isolation. One of the core reasons why social media got off the ground and took off so quickly was mobile technology. MySpace was one of the largest social networks at the time when Facebook was launched, with Twitter as a close second. It was really only ten years ago when everyone was communicating almost exclusively online through AOL or MSN Messenger. Oh those were the good days, weren’t they? The simplicity of an instant message, and the joy of spamming nudges at your peers… But little did we know then that Facebook dot com, a tiny but growing website would turn the world on its head.

In 2007, Steve Jobs took the stage at Mac World to announce how Apple had reinvented the phone. While there were already many other smartphones available, the entrance of Apple into the mobile technology game is what really solidified the way the world was going to work. At the time, Facebook for mobile was only available through a browser, but two months after the release of the iPhone, an iPhone-friendly version was released, optimised for a larger touchscreen. But it was only in 2012 that an official native mobile app for Facebook was launched, really starting the shift for social media.

It’s insane to think that social media really only entered out world in a meaningful way roughly ten years ago. In media years, that’s nearly a century of existence, but without the introduction of mobile technology, social media may not have been as pervasive as it is today. Nearly everyone on the planet who has access to an internet connected device has at least one social media account, with one of those being WhatsApp, WeChat, Facebook, YouTube or Instagram. There are nearly 4 billion monthly active social media users all over the globe, with nearly 99% of them accessing their platforms of choice from a smartphone. When we look at the history of social media, we have to give a nod to mobile technology, as without its success, social media would still just be stuck in a web browser.

Evolution requires progression and sacrifice. Mobile technology is the natural progression of social media’s evolution, since they influence each other in interesting ways. With the introduction of cameras on mobile phones, new applications sought to exploit these for easy content sharing on their platforms. Everyone has that one friend who Insta’s every single thing they eat. Lifestyle microblogging, such as your foodie insta mate, took on a entire new lease on life with social media, giving rise to the Influencer and creating a billion pound industry in the process.

The sacrifice made in order for this new world to take hold was the deterioration of the print industry. Print has taken a few economic hits in the past but none as bad as the current situation. When televisions were widely available in across the world, people switched from reading the news to watching it. The rise of the internet in the 90’s presented another decline for print, since people switched from reading the news in the paper, to receiving it straight to their inbox and reading it online. Social media swooped in, and turned the entire industry on its head, making it virtually impossible for print news to survive with every smartphone user, all 4 billion of them, now a citizen journalist. However, with the rise of citizen journalism, we now see news from every corner in the world, even the most locked down areas where the media is massively controlled by their state.

In ten years, social media, the internet and mobile technology have brought the world together in unimaginable ways. It has shone a light on human rights issues all over the globe, allowed citizens from various countries to show their solidarity, created new industries, given billions of people a voice, and completely revolutionised communication and entertainment. 70% of all social media usage is communication and entertainment, showing how much we rely on these applications to keep us in touch, and keep us entertained.

Some may argue that social media has made us more unsociable, but what it has done is change the access levels of social activities. While we used to go out to a show, we can now watch one indoors, on Facebook Live. Rather than travel to see your friends and family who live some distance away, you can stay connected through social media, and even video call them at any time. Social media has become one of the most important evolutions of our era, and the future and its potential looks very bright.

TILT Creative is a UK based creative agency specialising in content creation and managed solutions for blogs, websites, branding and social media. Désiré, the chief writer, artist and strategist behind TILT Creative Agency, has worked with a variety of clients (from startups to luxury brands) across all kinds of industries (such as automotive, beverage, construction, oil and gas, tourism, and health and safety) all over the world, including the United Kingdom, Dubai, Africa, America and the Caribbean.

TILT Creative’s core philosophy is to change the perspective, or ‘tilt’ it. How can you TILT your business? Could it be a brand refresh, a better experience on your website, or perhaps a stronger blog strategy? Maybe writing a book on your expertise could skyrocket your company’s credibility and revenue?

Désiré’s work quality stems from her ability to infuse your brand’s story with the essence of abstract creativity, and disseminate a unique experience that stimulates the senses to your customers on an individual level, while meeting your business’ objectives. Her comprehensive research process, attention to detail, and pursuit of perfection embellishes every piece of her work: writing and design. The results are always favourable.

Ready to TILT your business? Find out more at www.TILTcreative.agency or send an email to [email protected].

We know you want some TILT flair on your website.

We can whip something up for you with a sprinkle of unicorn magic dust. 🦄

We write for any industry that you throw at us. No industry is too technical for us. 💪🏼

Not ready yet? That’s okay, we all get stage fright 😅

Get the goods delivered to your inbox.
Subscribe now.

You know you want to 😈 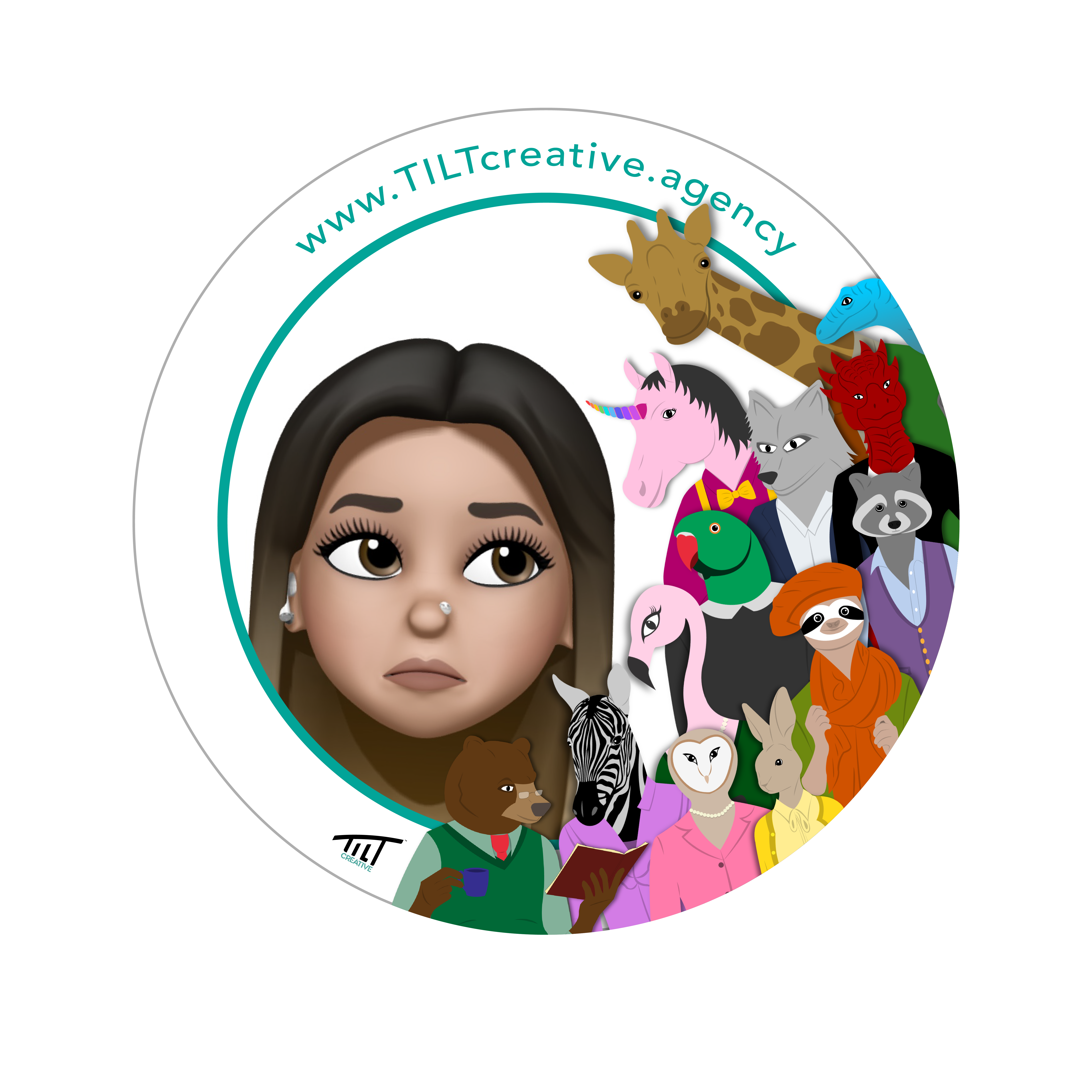 By submitting my data I agree to be contacted

Top Hits from the TILT Studio

Book a call with Calendly

Page load link
We use cookies on our website to give you the most relevant experience by remembering your preferences and repeat visits. By clicking “Accept All”, you consent to the use of ALL the cookies. However, you may visit "Cookie Settings" to provide a controlled consent.
Cookie SettingsAccept All
Manage consent

This website uses cookies to improve your experience while you navigate through the website. Out of these, the cookies that are categorized as necessary are stored on your browser as they are essential for the working of basic functionalities of the website. We also use third-party cookies that help us analyze and understand how you use this website. These cookies will be stored in your browser only with your consent. You also have the option to opt-out of these cookies. But opting out of some of these cookies may affect your browsing experience.
Necessary Always Enabled
Necessary cookies are absolutely essential for the website to function properly. These cookies ensure basic functionalities and security features of the website, anonymously.
Functional
Functional cookies help to perform certain functionalities like sharing the content of the website on social media platforms, collect feedbacks, and other third-party features.
Performance
Performance cookies are used to understand and analyze the key performance indexes of the website which helps in delivering a better user experience for the visitors.
Analytics
Analytical cookies are used to understand how visitors interact with the website. These cookies help provide information on metrics the number of visitors, bounce rate, traffic source, etc.
Advertisement
Advertisement cookies are used to provide visitors with relevant ads and marketing campaigns. These cookies track visitors across websites and collect information to provide customized ads.
Others
Other uncategorized cookies are those that are being analyzed and have not been classified into a category as yet.
SAVE & ACCEPT
Open chat
Need help? 💬 Chat now!
Hello there! Welcome to TILT Creative. Is there anything we can do to assist?